Over the two-day period, the event included a Capture The Flag (CTF) competition, broken into four sessions, in which teams and individuals raced to crack the challenges and collect the most points.

This is a write-up of one of the challenges called “Network challenge A”.

We’re given a link to download a zip file which contains the challenge assets; a packet capture file (PCAP) named somepcap.pcapng and an RSA private key file in PEM format named somepem.pem. We’re also instructed that the flag we require needs to be acquired from “the service” running on ctf-ch7.cyberthreat2018.com. Time to crack open the PCAP!

Opening the PCAP, we see a single TCP conversation between two hosts; a client and what we can safely assume to be “the service” alluded to from the challenge description, which in the PCAP appears to be running on port 31337.

Following the TCP conversation in Wireshark, we see the following: 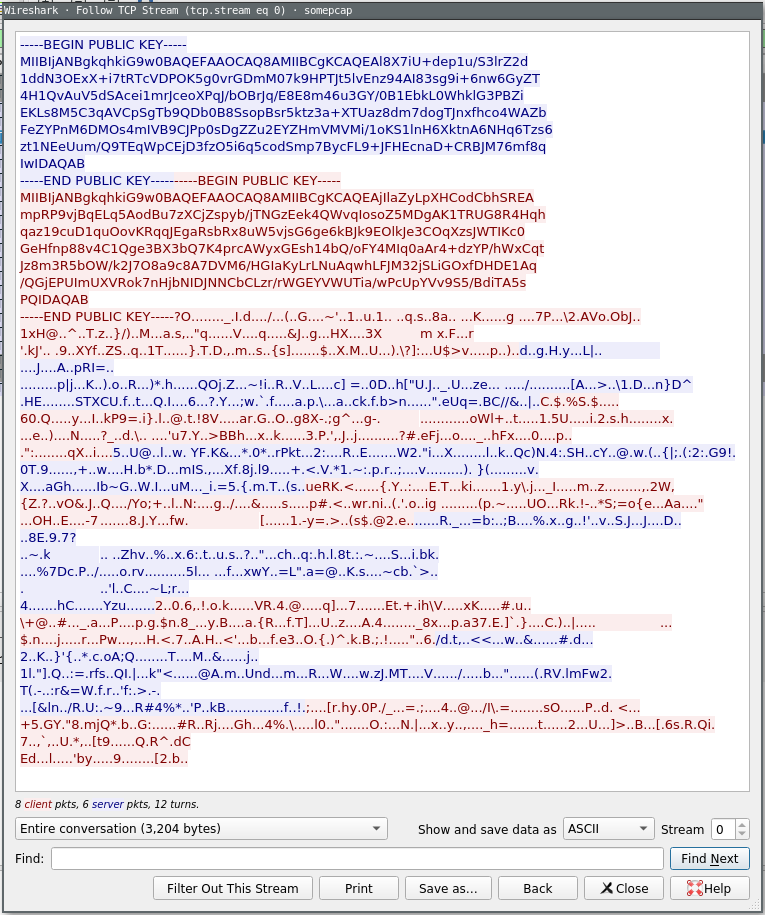 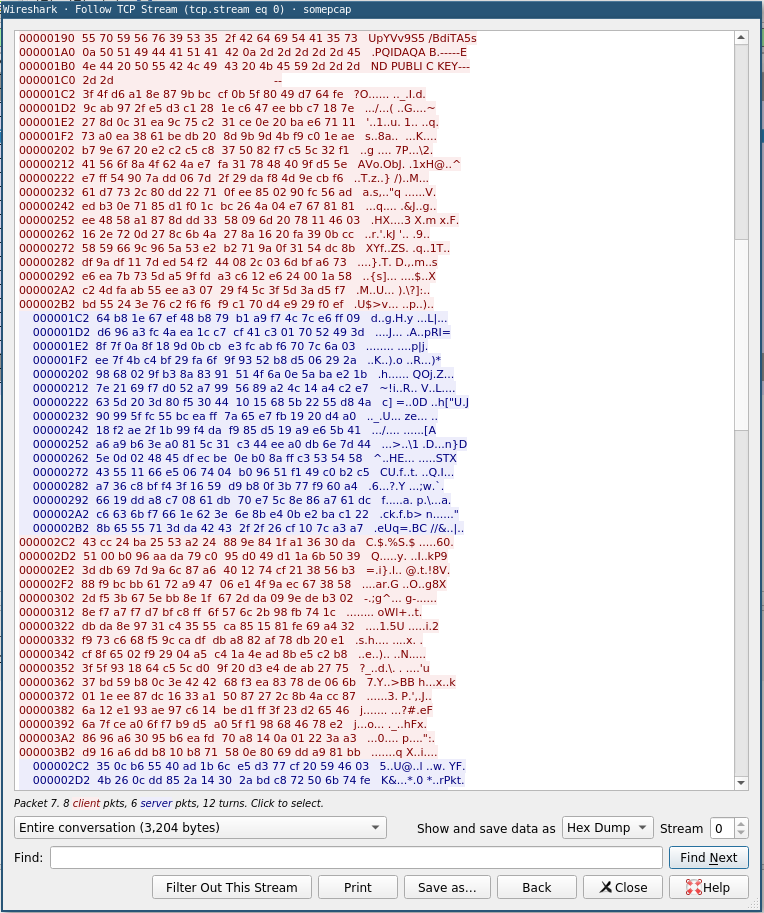 In particular, we see that the messages exchanged between the client and the service (after the exchanging of public keys) are always of a fixed size - 256 bytes (or 2048 bits).

At this point, we might theorize that the messages exchanged are encrypted asymetrically using RSA, with a high likelihood that the plaintext is padded to the 2048 bits in length prior to encryption. Specifically, when the client wishes to send a message to the service, it pads it, and RSA-encrypts it using the public key which was sent to it by the service at the start of the conversation, and vice versa for service to client communications.

Taking a peek at the data

Recall that, as well as the PCAP file, we were also provided with a RSA private key file, called somepem.pem.

From this private key file, we can calculate the corresponding public key using the openssl tool.

A-ha, this is the same as the public key which was sent from the client to the service in our packet capture, which means that we should be able to decrypt the messages in one of the directions in the TCP conversation - those from the service to the client.

Let’s attempt to decrypt the first encrypted message from the service to the client. By switching to the YAML view in Wireshark’s we can grab the first message in Base 64 encoded form, and experiment with openssl’s rsautl mode to try to decrypt it.

Bingo! The padding employed is PKCS#1 OAEP. We repeat this on the other messages sent from the service to the client to get the rest of this side of the conversation. I’ve used the convention of writing > ??? to indicate the unknown client message, with the server response immediately below.

At this point, we can throw together a small (terribly written!!) python script to interact with the service directly, which according to the challenge description is running on ctf-ch7.cyberthreat2018.com, most likely on port 31337 according to the PCAP.

Yes, I know that’s not how you should send and receive with python’s sockets. Yes, I’m using s globally. Yes, some of the naming is poor. Under CTF conditions, this is as good as you’re going to get ;P.

So, we execute our client, run the getflag command, and we’re done right? Right?

Damn, we don’t have any credentials for this service. We can’t see the credentials that were used in the PCAP because we don’t have the RSA private key corresponding to the service’s public key (which the client uses to encrypt traffic in that direction). So what are we to do?

Could you repeat that please?

At this point, I lost a lot of time in the CTF trying various methods of authenticating with the service; I extended my python script to brute-force credentials using the rockyou wordlist (this was slow, and bore no fruit), I tried using the adduser command with parameters of varying sizes in case there was an overflow onto some hypothetical is_authenticated variable on the stack, I tried to search online for the fingerprint of the service’s RSA public key in case it had been chosen from the set of weak RSA keys from back when Debian’s PRNG for key generation was broken. No dice.

“Have you considered a replay attack?”

Of course, the answer was the take the message which the client sent to the service immediately before it responded with Authentication successful. and send it to the service before dropping us into our interactive session - that way we would be logged in, and be able to request the flag.

(Note: that wasn’t actually what the flag was - I can’t remember what it was, and the service is only accessible from within the CTF network - you can safely assume it was an equivalently nerdy quote :P)

This is a good example of why you never write your own security code if you can help it. This was vulnerable to replay attacks, is succeptible to man in the middle attacks (you could sit it the middle and proxy requests, sending different public keys to the client and the service), and provides no perfect forward secrecy allowing us to decrypt the traffic in the PCAP in the first place…

A massive thank you goes to the team at Helical Levity for putting together the pre-conference challenges and this CTF, as well as to James Lyne and the folks at SANS EMEA and the National Cyber Security Centre.