Over the two-day period, the event included a Capture The Flag (CTF) competition, broken into four sessions, in which teams and individuals raced to crack the challenges and collect the most points.

This is a write-up of one of the challenges called “Binary challenge A”, and the methods used here were taken from an excellent two-part blog post series by @edskoudis on the SANS Penetration Testing blog.

We’re given a link to download a zip file which contains the challenge assets; a single Android application package file (APK) named ncscpin.apk.

Installing the application into a Genymotion virtual Android device (helpfully, Genymotion starts an instance of ADB server with the virtual device available, so we can just do adb install ncscpin.apk and we’re good to go) we end up with an app called NCSCPin. Firing it up, we are presented with a 5-digit pin entry dialogue. Entering a random guess such as 12345 gives us a toast notification informing us that the pin was incorrect. Moreover, it doesn’t seem like you can attempt to enter the PIN twice without closing the application and killing it from it’s suspended mode.

Clearly brute-forcing it is out of the question, so it’s time to get creative.

Using the excellent Apktool we can pull apart the APK and have the application’s dex bytecode decompiled into smali files.

Note the use of the -r flag to avoid decoding the package’s resources - we don’t need to modify these, and you can sometimes hit issues trying to rebuild the APK if the resources have been decoded. By not decoding them, they will simply be copied in their original form when rebuilding the package.

Apktool has created a few directories for us here, and the one we’re interested in is smali, which is where it has placed the decompiled application code.

Of interest to us in particular are the two MainActivity files in smali/com/example/mainuser/ncscpin - these are essentially the equivalent of an entrypoint for an Android application.

In MainActivity.smali we can see a virtual method defined called isPinCorrect - sounds interesting!

In MainActivity$1.smali we can see where this function is called from and a conditional jump on the value it returns:

By changing the conditional jump instruction from if-eqz to if-nez we can essentially reverse the PIN validation so that entering anything other than the “correct” PIN (which we don’t know) will be treated as a correct attempt.

Now that we’ve made our desired change, we can rebuild the package, again using Apktool, which places the rebuild package in the dist folder under our top level extraction directory.

Unfortunately, we can’t just deploy this new APK file as it currently stands - attempting to do so gives us the following error

Now we can use this keystore to sign our APK file

Now that we’ve signed our APK file, we can install it into our virtual Android device. Note that we have to uninstall the existing application first, as we haven’t gone to the effort of giving the application a valid update path.

Finally, we can fire up our modified version of the application inside the virtual Android device, enter our dummy PIN of 12345 and we get a toast notification containing the flag of HooksArentJustForPirates! 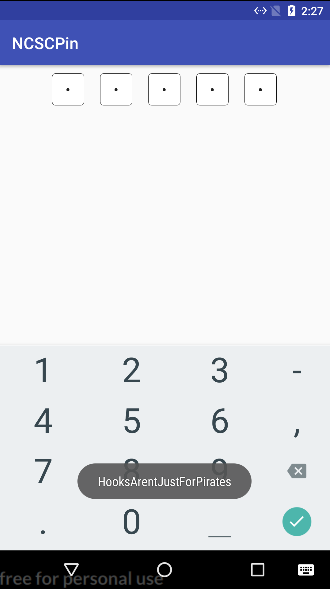 A massive thank you goes to the team at Helical Levity for putting together the pre-conference challenges and this CTF, as well as to James Lyne and the folks at SANS EMEA and the National Cyber Security Centre for making this awesome conference happen.